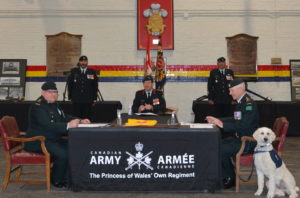 The Princess of Wales’ Own Regiment (PWOR) conducted a regimental change of command on 30 May 2020 at the PWOR armouries in Kingston, Ontario. Command of the Regiment was passed from Lieutenant-Colonel Steve Taylor to Lieutenant-Colonel Dave Beyer. The change of command was conducted as a small, dignified ceremony in place of a traditional parade in order to respect COVID-19 restrictions. Commander of 33 Canadian Brigade Group Colonel MacKay presided over the ceremony.
During his three years of command, LCol Taylor focused his attention on recruiting and retention. Since Strengthening the Army Reserve (StAR) commenced in April 2017, the Regiment doubled in size with 129 new recruits enrolled. Furthermore, LCol Taylor focused on the development of his soldiers to increase retention. The Regiment has qualified an unprecedented number of junior leaders during LCol Taylor’s tenure, and it has contributed hundreds of soldiers for both domestic and overseas deployments.
Congratulations and a huge thank you to LCol Taylor for his accomplishments at the PWOR. We wish him the best of luck on his future endeavours as we welcome our new Commanding Officer, LCol Dave Beyer.
LCol Beyer was commissioned into The Royal Westminster Regiment in 1987 where he served for three years before transferring to the Regular Force with the Princess Patricia’s Canadian Light Infantry. In addition to serving in a variety of staff appointments, LCol Beyer commanded four times at platoon level and twice at company level. He has a wealth of experience with both Training and Capability Development within the Canadian Army.
Throughout his military career, LCol Beyer served twice on domestic operations in Canada as well as three peace support operations in the Former Republic of Yugoslavia. He deployed twice more conducting security force capacity-building, first in Afghanistan and later in Jerusalem and the West Bank.
LCol Beyer is currently the Acting Director of the Canadian Army Land Warfare Centre and is expected to retain that responsibility until January 2021, at which time he intends to component transfer back into the Army Reserves to continue his service on a part-time basis. 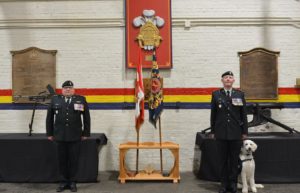