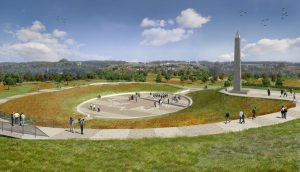 The Battle of Hill 70 saw an outnumbered Canadian Army Corps seize a critical point on the German defensive line in August of 1917.  Taking this vital high ground, which overlooked the town of Lens, were 14 Canadian battalions, under the command of LtGen Currie.  The Corps took the ridge from six German battalions, and subsequently succeeded in defending their ground against a counter-attack of 15 German battalions.  There were over 8,000 Canadian causalities.  Six Victoria Crosses were awarded. Although very much on a par with the earlier action at Vimy Ridge, the battle of Hill 70, conducted primarily by Canadian troops, and under sole Canadian command, is not recognized formally as a significant event in Canadian history.  There was no distinguishing feature to honour the men who achieved this stunning victory, and over nine decades after the event, the issue was remedied.  A group of like-minded Canadians, from various backgrounds came together to rectify the absence of a nationally significant memorial to recognize the action on Hill 70.  The Project unfolded in distinct phases, as funding was acquired.  His Excellency the Right Honourable David Johnston dedicated the site on 8 April 2017 and LGen Paul Wynnyk, Commander of the Canadian Army, opened the site to the public on 22 August 2017.

The Regiment and Hill 70