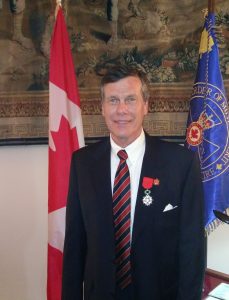 On Thursday 10 May 2018 Col Hutchings received the insignia of Knight of the National Order of the Légion of Honour (the highest distinction of the French Republic) from General of the Army, Benoit Puga, Chancellor of the Legion of Honour, at a ceremony in the Embassy of France, Ottawa.

This award recognized his leadership with the Hill 70 Memorial which has erected a monument in Loos-en-Gohelle, France to the memory of the Canadian Corps and its victory at Hill 70 under the command of LtGen Sir Arthur Currie.