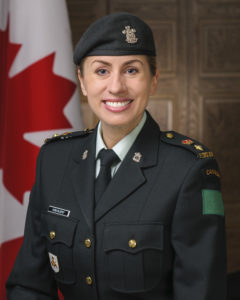 The Commanding Officer of the Princess of Wales’ Own Regiment, LCol Steve Taylor, is pleased to announce that the Minister of National Defence recently approved the appointment of Dr. Stéfanie von Hlatky as Honorary Lieutenant-Colonel for the Regiment for a three-year term beginning 1 January 2020.

The Canadian tradition of appointing prominent and influential Canadians as Honoraries to military units has been a Government of Canada practice for over a century.

The Honorary is the guardian of Regimental traditions and history, promoting the Regiment’s identity and ethos and being an advisor to the Commanding Officer on virtually all issues excluding operations.

Dr. von Hlatky is only the second woman to hold such an appointment at the Regiment.   The first was The Honourable Hillary M. Weston, who held the appointment of Honorary Colonel from March 1998 to March 2001.  Dr. von Hlatky is currently on sabbatical from her post as an associate professor of political studies at Queen’s University.  She is the former Director of the Queen’s Centre for International and Defence Policy.